Istanbul ranks 4th most favourable market in Europe for real estate investment this year, according to a Real Estate survey released by Pricewaterhousecoopers (PwC) and the Urban Land Institute (ULI).

Istanbul tops in ‘opportunities’
Istanbul ranked top in “development prospects,” obtaining 3.46 points out of 5 in 2012, as it did in a year earlier.

“It’s Berlin and London for the core, but it’s Istanbul for opportunities. It is Istanbul’s exciting economic and demographic potential that keeps it popular with interviewees,” the report said. Turkey’s Association of Real Estate Investment Companies (GYODER) estimates the change will boost investment in real estate by $5 billion a year. However, the report warned that a fragmented market and lack of institutional-quality assets in Istanbul made deals hard to secure.

Meanwhile, Istanbul’s real-estate sales number reached 24,244 in the fourth quarter of last year with a 24.8 percent increase from the third quarter, according to figures revealed by the state-run statistics body TÜİK yesterday. Istanbul took its place in the top five once again, ranking second in new property acquisitions performance last year. It was the leader in 2011.

“Global companies such as Nestlé and Microsoft, as well as newcomers from banking and insurance, are establishing bases, drawn by the proximity to cities in Russia and the Middle East,” TÜİK said. Mall of Istanbul is one of the biggest malls of Turkey and hosts the leading brands in the world attracting attention as the most functional shopping center of Turkey with its concept and the different units it accommodates. 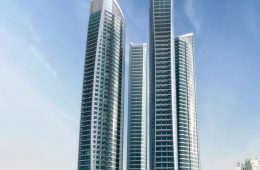 Metropol Istanbul will be one of the largest mixed projects of Turkey that combines a... Varyap Meridian is a high-end mixed use project in Istanbul. The five towers of the... iTower Bomonti is a joint project by FerYapı and Sinpaş GYO going up in Şişli Bomonti,... Trump Towers Istanbul will bring a new shopping experience to the 5th largest city in...