Istanbul is the only city in the world that’s spread over two continents, with the Bosphorus strait forming the dividing line between Europe and Asia. While many cities are defined by their skylines, Istanbul is distinguished by its vibrant neighborhoods. Although each neighborhood has its own personality and distinct appeal, all of the neighborhoods demonstrate Istanbul’s changing face, as this historic capital has become a magnet for all of the world’s citizens. One neighborhood you are absolutely must visit is Sultanahmet, this part of the city is essentially what used to be called Constantinople and where the city first sprang to life. Located just north of the Golden Horn and connected to the old city center by the Galata Bridge, the neighborhood of Beyoğlu is one of the liveliest and most colourful districts of Istanbul. Istanbul’s Grand Bazaar (Kapali Carsi) is one of the world’s largest covered markets,... Nisantasi is one of the most sophisticated, trendy shopping neighborhoods of Istanbul and is famous for its stunning Art Nouveau apartment buildings and its plethora of designer label stores. 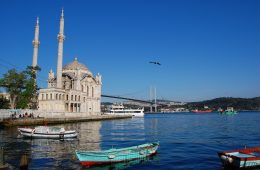 Ortakoy is one of the nicest neighborhoods of Besiktas districts on the European side of Istanbul, right under the first Bosphorus bridge.