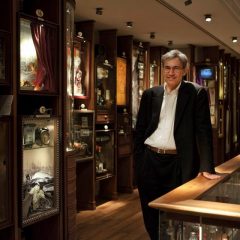 Orhan Pamuk’s ‘Museum of Innocence’ is celebrating the completion of its first year. A total of 40,000 people have visited the museum. The Museum of Innocence, defined as “where Time is transformed into Space,” is celebrating its first year. The museum was imagined “word by word, item by item, picture by picture over a very long term” by Orhan Pamuk, and has been open one year, four years after the release of his novel “The Museum of...