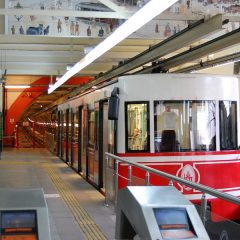 Tünel, a short underground railway line in Istanbul, Turkey, has been rated “as one of the strangest transport alternatives in the world,” according to a recent article.

The European and Asian sides of Istanbul are now connected for the first time with a railway tunnel, as the long-awaited Marmaray finally opens on the 90th anniversary of the foundation of the Turkish Republic. A Turkish-Japanese consortium has realized the project, called the Marmaray, fulfilling a 150-year-old dream. The Marmaray will provide a non-stop railway route connecting China to Western European markets and vice versa as a...